“Six Flags aspired to Disney- and Universal-league sophistication when it introduced its first Battle for Metropolis dark rides in 2015 at two of its parks. Incorporating 3-D media, roving motion-base vehicles, animatronics, and interactive gaming, the attractions are super, man. The park chain has since been rolling out the rides at additional locations, including three in 2017. Six Flags Magic Mountain, however, got a supersized version that includes an extended pre-show experience, a new animatronic Harley Quinn character, and an extra scene with an alternate ending. It delivers even more of a wow factor.”

Wyatt Design Group contributed to the winning team by providing show set design on the first two installations for Six Flags over Texas and St. Louis, which then were cloned for multiple Six Flags parks.  Proud that the grand-daddy of them all is located at Six Flags Magic Mountain where we were able to take the staff to ride the experience for real.  Congratulations Sally Corp.  You’ve made history! 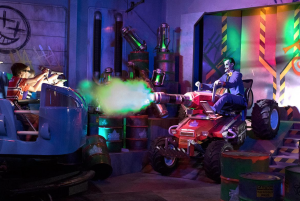