The Light of Wuxi (Studios)

We congratulate Wuxi Studios, Christie®, and its Chinese partner Wincomm Technology on producing China’s First Permanent Projection Mapping Show, “The Light of Wuxi.”  When we developed the master plan for the adaptive reuse of a former steel mill into the major film studio, retail, and entertainment destination that is now Wuxi Studios, it was just such a spectacular nighttime show that was intended for the central lagoon to create a must-see attraction to draw visitors from throughout the region for an evening along the waterfront of the studio park.  We are pleased to see this central focal point of the development being used to its full potential. Well done! 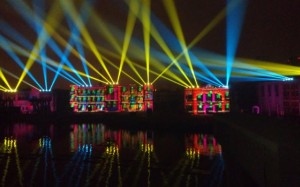 The Chinese movie studio project nicknamed “Chinawood Studios” was master planned and designed in 2010 ( by Larry Wyatt’s Pasadena studio  – formerly known as MSI Design) and completed in 2012 is coming to life as Wuxi (National) Digital Film Industrial Park.  This leisure destination is a virtual “movie city” featuring an entertainment district, retail, dining, cinemas as well as a film production facility complete with themed backlot streets.   Christie® Digital has recently installed a 5D show titled “Light of Wuxi,” the first permanent projection mapping show in China (watch video here) choreographed with dancing fountains in the large waterscape area on the shores of Lake Taihu. The light show is presented every Saturday evening on two buildings and a water screen, in a 17,000 s.f. area.  The show also uses laser lighting, fire, water jets and musical effects. During the show, the audience’s attention focuses on two buildings across the lake with one transformed into a “magic cube” that continuously changes its shape with the rhythm of the music. Another portion of the show features blue dolphins leaping from the lake and creating realistic and vivid sounds of waves and splashes that further contribute to an immersive experience. As bright lights and laser effects illuminate the night sky along with breathtaking audio effects, the entire Wuxi Studio transforms into a fantasy world.