July 2014 (Pasadena, CA) Master planner and renowned attraction design firm Wyatt Design Group (WDG) is proud to be selected by U.S.-based ride producer Sally Corporation (Sally Corp.) to provide Show Set Design for the first motion-based interactive 4D dark rides in North America: Justice League: Battle for Metropolis will open in the Spring of 2015 at Six Flags Over Texas and Six Flags Over St. Louis. Based on the DC Comic superheroes, this new adventure features Superman, Batman, Wonder Woman, The Flash, Green Lantern, and Supergirl in a fight to save the city of Metropolis from mass destruction. They are aided by the amazing Cyborg who recruits guests for the volunteer force and demonstrates how to defeat the menaces at hand with powerful laser blasters in this truly immersive storytelling and game play experience.

“This was our second time working with Sally Corp. with this particular Intellectual Property, having worked on Justice League: Alien Invasion 3D in 2012 for Warner Bros. Movie World in Australia. For this new project, the storyline, 3D media content, and sets were completely different, with two different layouts for existing buildings at two locations. We had just over two months to develop both rides of 10 scenes, with a team of five designers. It was quite a challenge. We are thrilled that John Wood, Sally Corporation’s CEO, put his trust in us for these next-generation Justice League rides for Six Flags. John and his team are so great to work with, the process was very efficient,” observed Larry Wyatt, Principal, Wyatt Design Group.

“Our job as show set designer for this proje 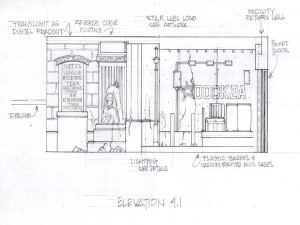 ct was to look at these new rides with a different perspective; with a distinct and different immersive experience, taking into consideration new and enhanced media visuals, a more advanced ride system, and an entirely new DC Comics storyline. The facility floor plans were completely different for the two installations, so WDG’s challenge was to design in the flexibility to fit some of the scenes in very tight spaces and still be convincing,” remarked Mark Shumate, Senior Art Director at WDG. Wyatt Design Group’s involvement came early on in the development of the project orchestrating the critical path elements: the facility (architecture and project planning), the ride system, and the show and themed components. Working collaboratively with Art Director Rich Hill (Sally Corp.), the IP owner (DC Entertainment/Warner Bros. Consumer Products), and with the ride manufacturer’s specifications (Oceaneering), the media producer (Pure Imagination), and taking into consideration the logistics of time, space, and budget, WDG created a tangible and physical product (show set design package) that was bid from, detailed, and eventually built by the fabricator (Lexington Scenic) and all the providers of the installation.